This versatile spice mix can be used for both sweet and savory recipes in everything from Pumpkin Pie to Pumpkin Smoothie Bowl to Pumpkin Soup.

All recipes should be a guide and not a rule or as I like to say – A recipe is not a bible!

I think all recipes should be seen more as a template, where you can customize it to your own palate.

You can stick with the Classic Pumpkin Spice Mix but especially for those of you who come from cultures with spicy food like African, Indian, Middle Eastern, Caribbean and Latin – I think you will prefer the alternate verion, which has a little more kick to it.

How do you know it’s fall? Is it by looking at the calendar? Is it when the weather starts to chill?

I have always been a little reticent when it comes to Pumpkin Spice because everyone loves it so much and gets so excited about it all like they just won the lottery…and I’m always thinking to myself oh no I won’t be able to get away from Pumpkin Spice for the next 3 months!!!

It’s not that I don’t like the spices of pumpkin spice. I think it’s just the over exposure of it that I get to feeling – Can’t I just get a slice of plain pound cake someplace? Apple cider donuts? Traditional Masala Chai?

Why does every fall it has to be used in excess and then no one even thinks about it for the other 9 months of the year? I just don’t get it!

I prefer to use it in moderation throughout the whole year!

Maybe it’s because I make pumpkin based recipes throughout the year. Coming from the Caribbean, pumpkin is a staple of our cuisine. While only recently I have started to embrace things like Pumpkin Smoothie’s and Pumpkin Overnight Oats, Pumpkin Soup, Pumpkin Curry, Pumpkin Sauce with Fried Fish and other pumpkin based dishes are things I enjoy all year from January to December.

Also because I live in a culturally diverse area, fresh pumpkin varieties like calabaza and kabocha is easy to come by. Are you also lucky where you have access to fresh pumpkin or do you only have the option of using canned pumpkin ☹

In fact, I was once so surprised when I was hired to teach some ethnic recipes to a major food brand. One of the recipes I was teaching was sancocho,  a soup from the Latin Caribbean. As I started portioning out the ingredients, one of the students asked me what it was when I started to get ready to cut the pumpkin.

Let’s just say I had to diplomatically cover my shock and awe!

Are you as lucky as me? Is fresh pumpkin something that is easy to come by where you live? Let me know in the comments.

If it is, make your own homemade pumpkin puree for all your sweet recipes with this Roasted Pumpkin Puree Recipe.

So you might be wondering what is pumpkin pie spice made of.

Whether you use the Classic Pumpkin Pie Spice Mix or the Spicy Pumpkin Spice Mix, they both consist of smoky spices.

Let’s  go over the ingredients you are going to need. You probably have all of these ingredients already in your pantry.

I have met and seen comments in the blogosphere of people who don’t like cinnamon and I have even met a few people who are allergic to cinnamon.

So here’s the formula if you prefer to make it without cinnamon!

How to make Pumpkin Pie Spice

Then it will be ready whenever you need it!

Here are a few recipes you can add some of this Pumpkin Pie Spice to.

PICK YOUR OWN PUMPKINS

Yes that’s right you can easily pick your own fresh pumpkins at your local UPICK FARM! Remember what Mom always said – Fresh is best!

It’s also great in your morning cup of coffee or tea – or hot cocoa too!

While I always keep a variety of spice blends in my pantry, as far as I am concerned, you can never have too many. If you want to guarantee that you NEVER get bored even with simple grilled chicken, roasted potatoes or steak recipes, Raw Spice Bar is a company I LOVE. 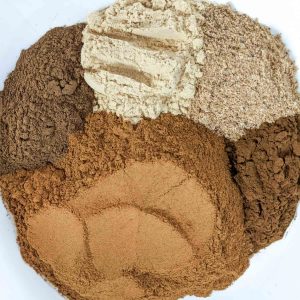 Print Recipe Pin it for later!
5 from 4 votes
SAVE THIS RECIPESaved!