Homemade Creole Seasoning is a bold mix with just the right amount of smoke, herbs and aromatics. Not only just for Cajun and Creole cooking, but this Cajun Creole Seasoning can be used to flavor everyday meals like grilled chicken or burgers. However, some people prefer a little less spice so here you get two methods, depending on your palate.

Have you ever been to New Orleans?

What is the most memorable thing about your trip there? I bet you at least 99% of you will say the food.

Of all regional American cuisines, the Cajun and Creole cooking of Louisiana is by far the most popular.

There is a lot of variety of Creole Cooking and creole spice mixes. Everybody has a different palate and makes it a little different. Some people prefer it a little more herbaceous and not as much smoke and spice, while other prefer it bold and smoky where it punches you in the face, so here I created two Cajun Creole Recipes for everyone!

Creole Cooking has always felt familiar to me from the first time I tried it when I visited New Orleans for the first time when I was about 12. I later found out why.

The first Caribbeans who came to America were Haitians. As the first independent black country in the world, it was a regiment of Haitian soldiers that helped America during the American Revolution. Many Haitians stayed in French controlled Louisiana. With a common language, they felt at home there.

If you want to learn more about Haitian contributions, read all about it here in my Savannah travel post, where a statue detailing their contributions exists.

However there are a lot of reasons to make it yourself!

Why should you make your own homemade Creole seasoning?

There are many ways to use Creole Seasoning both in traditional Cajun and Creole recipes, as well as in everyday meals.

So if you want to add a little creole kick to any of your everyday meals, this Creole Spice Blend definitely hits the mark!

Although there are differences between Creole and Cajun recipes, this usually comes out in cooking styles and the use or lack of use of tomatoes. Therefore, this Creole seasoning in all purpose spice mix that can be used in any Creole or Cajun recipe.

Is Creole Seasoning the same as Gumbo File Powder?

File Powder is made from ground sassafras, what you might know as asoefetida if you do a lot of Indian cooking. Not only does this mimic the flavor of onion and garlic, but it serves as a thickening agent in gumbo instead of using butter and flower.
You can use this Creole seasoning in addition to gumbo file powder when making gumbo, but not instead of.

Creole seasoning is both flavorful and spicy. although the spice is not overpowering. However, if you cannot tolerate any spice, simply omit the cayenne pepper. It is still a flavorful spice mix that you can even add to simple recipes like grilled chicken or roasted potatoes.

And if you would like to make some more DIY spice blends, check these out!

and download my FREE Spice Blend Cookbook – Spice it up!

I like to have a variety of spice mixes always made, so that when I’m cooking or just want to spice up my homemade popcorn, I am not relegated to just one.

Here are the tools you will need to start making all of your own Homemade Spice Mixes.

Make sure to label them differently, so you know what’s what!

So now you have everything you need, let’s check the pantry to make sure you have all the spices in house.

The ingredients are the same for both versions of Creole Seasoning. It’s only the quantities.

How to make Creole Seasoning Blend 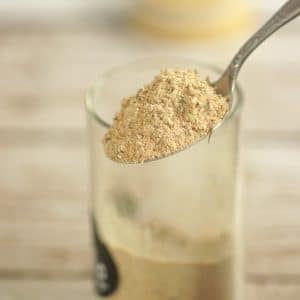 Easily make your own spice blend for Cajun and Creole cooking, as well as the low country cuisines of the southern United States.
Course: Spice Blends
Cuisine: American
Servings: 8 people

If you prefer a completely pulverized spice mix, you can use a coffee/spice grinder to grind the spice mix to a powder. Some Creole Seasonings are more red in color. Just add more paprika if you want more color! Yield: approximately 1 cup
Did you try this recipe? Leave a comment below.Please follow me on Instagram @chefmireille or tag me #chefmireille with your pics! I’d love to share them!