Caribbean Pumpkin Soup is a classic recipe, with all islands having their own variations of this Spicy Pumpkin Soup. This version is made with smoked meat, a characteristic of many of the smaller British and French Caribbean islands.

Although Jamaican Pumpkin Soup may be the most popular in the United States, due to them having the largest representation of Americans of Caribbean decent, there are many versions that are just as delicious.

This Spicy Pumpkin Soup can be Vegetarian or sometimes made with meat. Homestyle Pumpkin Soup in the Caribbean can happen several types a week. Therefore, it will vary in the type of meat, if any, is added to it for variety.

Although not specific to Dominica only, this type of homestyle West Indian Pumpkin Soup you will find on many of the smaller islands like Martinique, Guadeloupe, Antigua and Anguilla.

In the smaller Caribbean islands, the use of smoked meat is more prevalent. I remember the first time I visited Dominica as an adult, I was amazed at the variety of smoked meat in the supermarkets. Just like we have chicken wings, chicken thighs, pork chops, etc. , in Dominica, all of these meat varieties were smoked there.

I think the reason is that with these smaller islands, modern things like refrigeration came much later, therefore, they needed a way to preserve meat.

This version of Pumpkin Soup is closer to the versions you may find on islands like Dominica or Antigua.

The smoked meat really adds a unique flavor profile – smoky and salty. You will find you need very little additional salt, if any.

What type of pumpkin is the best?

There are many classifications of winter squash that can be classified as pumpkin. Everything from tender Butternut Squash to hearty Acorn Squash.

However, in the Caribbean we basically use two varieties of pumpkin, which has now become widely available in the United States.

Both of these Pumpkin Varieties have bright orange flesh:

Calabaza can be very large in size so very rarely sold whole, but cut up. The skin ran range from tan to golden with light green accents.

Kabocha has a dark green skin and are usually smaller in size, therefore they can be sold whole or cut up.

Pick your own Pumpkins at your local UPICK FARM

Now that you know all about the different types of pumpkin, in my opinion, the best pumpkins are always the ones you pick yourself so if you have the time I suggest going to visit a local UPICK farm. Pick fresh seasonal produce at local farms. There are locations throughout the United States and remember fresh is always best!

Either of these two pumpkin varieties are good options for Caribbean Pumpkin Soup. Caribbean people do not utilize canned pumpkin for soup so I have never done it, however, if fresh pumpkin isn’t available, I don’t see any reason why you can’t make this Spicy Pumpkin Soup with canned pumpkin since the base is a puree.

Us Caribbean People LOVE our Pumpkin and use it in so many ways – both in Savory Recipes & Sweet Recipes. If you are as pumpkin obsessed as I, make sure to check out this collection of Over 30 Pumpkin Recipes!

Caribbean Seasoning is not just salt and pepper. When a Caribbean person says they added seasoning, this can be any combination of onion, garlic, ginger, bell peppers, celery, carrots and thyme.

What is included is really dependent upon whatever you have in your refrigerator but the required ingredients are onion, garlic and bell pepper. With my Mom being from Aruba, I probably use more bell pepper than most. In the Dutch Caribbean, we love our bell pepper. However, you can adjust the quantities according to your own preference.

Usually, this is all chopped up together once a week and kept in the refrigerator to add to most food cooked – we add it to rice, soup, vegetables, meat marinades and would definitely add flavor as this Pumpkin Soup seasoning. This is basically a homestyle rough version of green seasoning, Epis or sofrito.

If you make this to add to the soup, you would add it at the stage when you are boiling the pumpkin. However, this soup has a lot of flavor and it is not a required ingredient.

Now you have everything you need to know to make the most delicious homestyle Caribbean Pumpkin Soup. Let’s check the ingredients you will need.

How to make Caribbean Pumpkin Soup

What to serve with Pumpkin Soup

In the Caribbean, Pumpkin Soup in this style with meat and spit peas is quite filling. Therefore, it is generally served on its own as a meal.

If I have inspired you to visit the Nature Island of the Caribbean with this recipe, you can find out more what you can expect when you go to Dominica with these posts:

Don’t forget to check out some more recipes from Dominica, to explore all the delicious flavors of this little island. 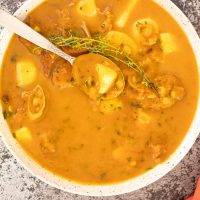 Print Recipe Pin it for later!
5 from 5 votes
SAVE THIS RECIPESaved!