Haitian Beignet is basically a variation of French Style donuts popular in all areas of the world the French colonized or had a cultural influence. The difference is that these are made with ripe sweet bananas and infused with Caribbean spices, elevating the simple donut to Haitian Benyen.

In America, you have Mardi Gras and in the Caribbean, we have Carnival. In Haiti, you will find Haitian Beignet de Carnaval being sold all over Port au Prince during Carnival celebrations. It is one of the most popular Carnival foods.

In Haiti, they would most often be made with fig banana, but you can also make them with regular bananas.

These are light and airy and infused with flavor enhancers like rum and vanilla. One thing to note – you will not taste the rum so these are totally kid friendly. Are you ready to add some Haitian spice to your Mardi Gras celebrations this year?

But before we get to this delicious Haitian Street Food recipe, don’t forget to check out all of my Haitian Recipes here.

So then why include the rum? After all, it’s not Rum Cake right!

Purpose of the Rum

Pretty much all Caribbean sweet recipes like cookies, cakes, candy and donuts will include a bit of rum. Distilled from sugar cane, rum is a natural flavor enhancer that will, with subtlety, elevate the flavor of the food. However, it is not just for flavor.

Many people might say they don’t see the purpose of the rum, but it also adds moisture and the alcohol makes it more tender and have a better texture.

Beignet is basically the French word for donut and there are different variations of beignet everywhere the French went from New Orleans to African countries like Cameroon to the French Caribbean. I have already showed you this French Caribbean Beignet version made with blood orange juice, but today I am going to show you Haitian Benye, which are made with banana.

Are Beignets Donuts or Doughnuts?

So why are these called donuts and not doughnuts? Have you ever wondered about the two different spellings?

Basically, it comes down to how they are made. Doughnuts are made from a yeast raised dough like these Picarones (Peruvian Doughnuts), however when a leavening agent like baking powder or baking soda is utilized, they then automatically become instant donuts.

Using yeast based doughnuts will result in a more bread like consistency and even a slight sour tang – similar to sourdough.

Instant Donuts, however, result in a more cake like result. You can also make them on the fly, as there is no rising time so far easier and faster than making traditional yeast doughnuts. I also won’t fault you for calling these instant donuts a banana fritter either.

Are bananas the same as fig?

Many Caribbean people refer to bananas as fig. When the fig are green, they are cooked and eaten as a savory side dish, usually prepared simply by boiling.
Haitian people let these fig banana ripen to make benyen. They are a little smaller in size than most of the bananas in America, however, you can substitute regular bananas, as that is what I usually make these with.

Are New Orleans beignet the same as Haitian beignet?

Traditional New Orleans Beignet are yeast raised, while the Haitian beignets uses baking powder for leavening. Other than the addition of banana, this is the major difference between these two types of beignet.

Can I omit the rum?

The rum is simply a flavor enhancer, however, if you prefer not to use it, it can be omitted.

So now let’s check the ingredients we need to make these delicious Banana Beignets.

How to Make Beignet Banane

These delicious Haitian Beignet Recipe is so delicious -kids and adults alike will love them. Enjoy one of Haiti’s most popular Beignet de Carnaval. 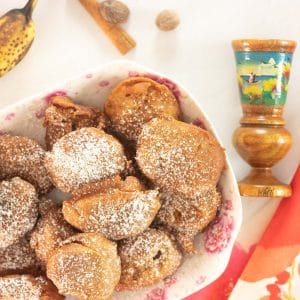 Print Recipe Pin it for later!
5 from 5 votes
SAVE THIS RECIPESaved!

If you’d like, you can also add a pinch of ground star anise. The flavor and taste is best when using overripe bananas.