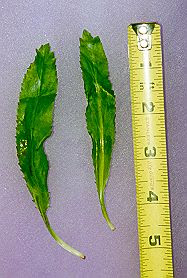 One key ingredient I forgot to include in the recipe last night – fresh parsley – Hope no one tried to make it tonight without this important ingredient. Adding 1/4 cup of fresh parsley, finely chopped to the marinade adds a freshness to the chicken. Otherwise the chicken will seem a bit heavy with the double whammy of two smoky spices – the cumin and the coriander.

Please try the recipe with the 1/4 cup of parsley and I always appreciate your feedback.

Since we are talking about parsley, the herb of choice for most European and American based cuisines, as well as Middle Eastern. This is the all purpose herb included in most savoury dishes, however, Asia, African and many other countries have other herbs as their staple and if you can find them, I think they have way more flavor than boring parsley especially when making simple foods like an omelette – just adding a little bit of cilantro or Chandon Beni will make a world of difference.

Now the difference between these herbs for those who are unfamiliar with them:
Parsley, cilantro and chandon beni (pronounced shadow beny) are all relatives. Most people are familiar with both parsley and cilantro. They look very familiar. For years, the only way I could tell them apart was by smell. Cilantro has a very strong smell.

Parsley is an herb with a mild grassy taste. It is a holistic herb. Many people in the Caribbean drink parsley tea to aid in the control of high blood pressure and the Cherokees use it in a tonic to strengthen the bladder.

On to cilantro. Cilantro or coriander as it is called everywhere else in the world except the United States and South America – we always have to be different, don’t we? Just like the Metric System – we can’t be like the rest of the world!! Anyway, cilantro has a much stronger taste and aroma than parsley and has a citrus like taste. The coriander plant also bears fruit. These dried fruits aka coriander seed are one of the primary ingredients in all curries. Coriander leaf is the herb of choice for most of Asia, parts of Africa and in Scandinavian countries. It is one of those things – you either HATE it or you LOVE it – no middle ground, so you just have to try it (if you have not already done so) and decide for yourself!

Chandon beni, aka culantro, recaito or saw leaf herb (depending what part of the world you are from) is the other relative of parsley and cilantro. It smells and tastes are similar to cilantro, but even stronger. A LITTLE GOES A LONG WAY is the rule when you are using this herb. It is the most common herb used on the island of Trinidad. Very few savoury dishes will be cooked there without the addition of the ever present chandon beni. Since coriander is so prevalent in East Indian cuisine, the Indians who came probably found this as the best alternative since coriander is not indigenous to the Caribbean. Chandon beni has a similar taste, although it does look different – this became their replacement for coriander.

Please try chandon beni ( the one many of you have probably never heard of) and let me know what is your favorite all purpose herb!!!