Of all the northeastern cuisines, I am most familiar with the foods from Sikkim, which is basically Tibetan/Nepalese cuisine.  This is due to a few Tibetan restaurants in NY that I like to frequent.  One is just a few blocks from my house and Himalayan Yak is one I frequent as often as possible. In fact, I have three reviews of restaurants that feature this cuisine on this blog.

Momos you will find on any restaurant menu that features Tibetan/Nepalese food.  The national dish of Tibet, they are dumplings that can be filled with either meat or vegetables.  The most common filling is yak.  While I have had the authentic Yak Dumplings when I visited Himalayan Yak, I have no idea where to go to purchase some yak meat in New York.  Therefore, I kept it simple with a vegetarian filling.

I have actually wanted to try making these at home for a long time.  I have had it bookmarked for quite a while.  When I picked up this BM theme, this was my chance to finally try and make them.

First make the dough.  Place the flour in a ball and add the water a little at a time, until you have a smooth dough.  Cover with a damp kitchen towel while you prepare the filling.
In a large bowl, combine the pumpkin with the cabbage, mushrooms, onion, ginger, garlic, cilantro, soy sauce and bouillon powder.  Add salt, to taste.  Mix well. 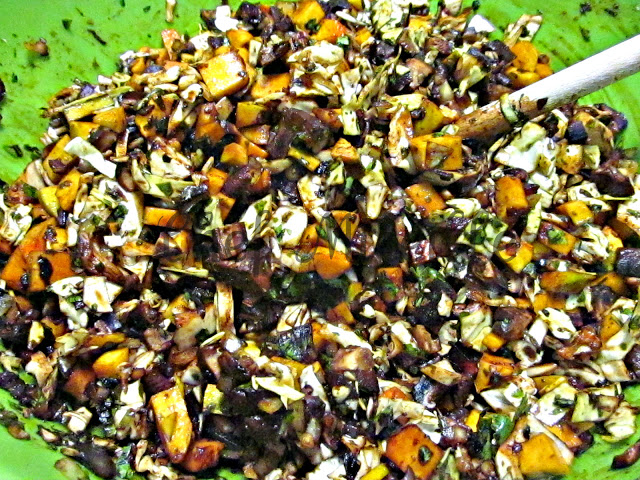 Work with 1/2 of the dough at a time. Keep the other half covered with a damp towel. On a lightly floured board, roll out the dough into a large circle as thin as possible. Using a 3 1/2 ” round biscuit cutter, cut out circles of the dough.  Put a little filling on  each circle.  Fold over and seal with water. Crimp the edges to make sure stuffing will not come out. Keep covered with a damp towel, until ready to steam.
Place a bamboo steamer on a rack in a wok. Fill wok up to the bottom of the steamer with water.  Oil the steamer compartments well.
Place stuffed momos in the steamer, cover and cook for 25 minutes. 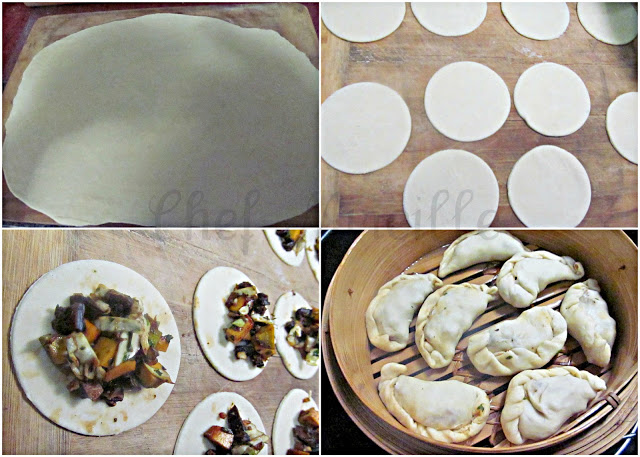 Momos are either round or crescent shaped.  They are traditionally served with a Tibetan Hot Sauce called Sepen, but I just used Green Chili Sauce.