Turnbrod is a kind of Swedish flatbread. Literally translated, it means thin bread. They can be made with a variety of grains that can include any combination of oat flour, rye flour, barley flour and wheat flour. Rye is the required grain and some versions will be made with 100% rye flour. Due to the whole grain nature of this bread and the fact that rye is a low gluten grain, this bread is made with both yeast and baking soda, for additional leavening. Keep on reading and I will guide you how to make Turnbrod – Turnbrodsrolle – Swedish Street Food Rye Wraps – this is a wholesome hearty sandwich not to be missed!

On a side note, I discovered some interesting trivia when doing research for this recipe. I noticed some versions had something called antler salt. Of course, curious me had to research what in the heck that was. Well did you know before there was baking soda, people would use the ground up antlers of a male deer, which later became known as Hartshorn. If the antlers weren’t available, it was also sometimes made from distilled hair or decomposed urine. Thank God, scientific innovation persevered and chemically reproduced this baking aid as baking soda. So we can be sure there is no longer decomposed reindeer urine in our baked goods.

There are two versions of Turnbrod. One is rolled paper thin and baked crispy in the oven into crackers. These are often heavily spiced with fennel, anise, black pepper, cardamom and/or caraway. This version will also often include seeds like sunflower, poppy seeds or pumpkin seeds. Then there is the plain version that does not include all of these extra ingredients and is cooked stove top into a soft tortilla like bread. They are both usually rolled with a textured rolling pin that is used in many Swedish breads/crackers like Knakkebrod, which create great air pockets and a decorative appearance. Since I did not have this, I simply pierced the dough with a fork after rolling. Although I did not get it, if you would like to achieve the authentic results by using the textured rolling pin, you can get it from Amazon here.

My Indian readers might refer to this as the Swedish paratha!

A few years ago I was watching an episode of the TV show Street Eats, where episodes explore street food throughout the world. I made notes so that I can later try to recreate some of what I saw. When the BM theme of Swedish food became available this month, I remembered the Turnbrodsrolle, which includes just about everything stuffed into a sandwich. I finally got the opportunity to recreate the Turnbrodsrolle, after making the Turnbrod.

To make the Turnsbrodrolle with this bread, you will need:

Now is that a sandwich or what? 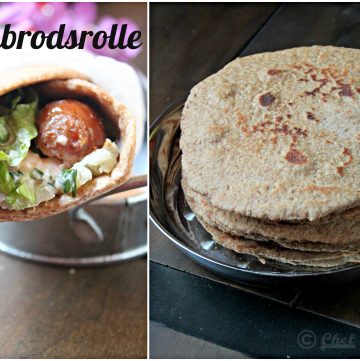 Breads should be stored in the refrigerator. To make them soft again, simply wrap in paper towels and reheat in the microwave for 30 seconds.
Did you try this recipe? Leave a comment below.Please follow me on Instagram @chefmireille or tag me #chefmireille with your pics! I’d love to share them!