Tito Rad’s is a Filipino restaurant, located in Sunnyside.  Except for making Pancit and Kare-Kare once in culinary school, I have had very limited exposure to this cuisine.  Never mind the fact that there is a Filipino restaurant 4 blocks from my home that I have not managed to try yet.  This cuisine is unique, when compared to other Southeast Asian cuisines.  Having been colonized from the Spanish, the cuisine is a mix of both Asian and Spanish influences.  There is a lot of fried food and a lot of pork.

If you are vegetarian, stay far away from this place.  Even in the vegetable section of the menu, most vegetable dishes include some form of smoked or ground pork for flavor.  The only thing you would be able to eat is the Bean Sprout Fritters, which are lacking in flavor.  This I liked the least.  It was just a crunchy, oily mess with no flavor. 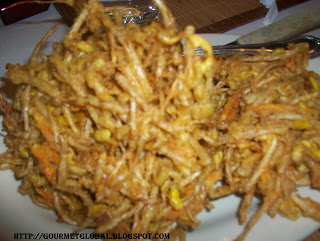 I was worried about the meal as I was far from impressed by these straw-like fritters.  Next was the fried pork intestines.  I was not really looking forward to this, as offals, sweetbreads and the like are not usually my cup of tea. Eaten with the sweet and spicy vinegar accompaniment, these were full of flavor and had a digestible texture; not rubbery as expected, but just slightly chewy.  They were quite good, however, not something you can eat a lot of.  The chewiness becomes not so appealing after the uniqueness of the taste goes away. 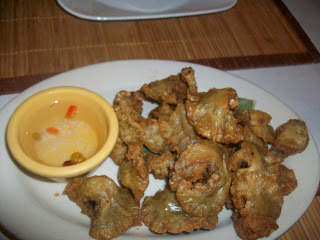 The Lumpia Shanghai were full of  robust flavor, stuffed with pork and vegetables. 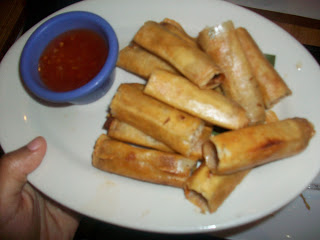 The spicy liang is one of the vegetable options.  It is made with taro leaves, coconut milk, pork, shrimp and chilies.  This is a multi-layered dish, bursting with the heat of the chile, the salt of the cured pork and the sweet coconut. 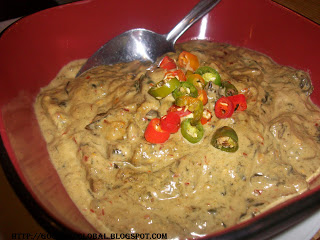 The chicken and ginger soup was a wonderful light soup, bursting with ginger flavor. 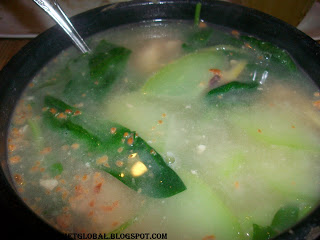 The tamarind soup was too tart. Tamarind needs something sweet to balance the flavor.  Without the sweet element, it was too sharp and astringent. 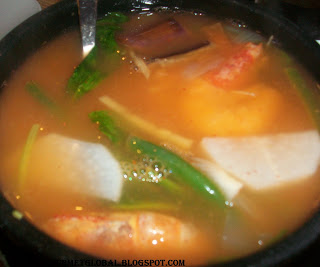 Crispy pata, the Filipino version of pernil (Spanish roast pork), is named so because the skin is supposed to be very crispy, with tender meat.  The skin was not crispy which made for fatty tasting skin, although the meat was well seasoned and flavorful. 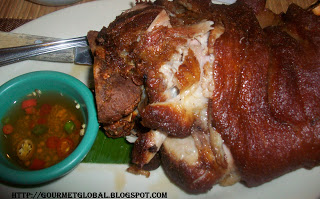 Pancit is the filipino word for noodles and the menu had several options.  I sampled the Pancit Satonghon, made with cellophane noodles, shrimp and the ubiquitous pork.  This was one of my favorite things from Tito Rad’s.  It was very flavorful and offered a balanced plate with the vegetables. 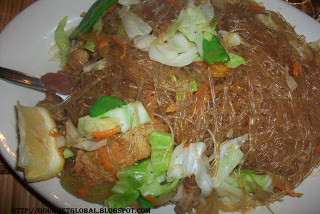 Kare-Kare is a Filipino specialty of stewed oxtails in peanut sauce.  Although not that special on its own, when eaten with the accompanying shrimp paste, it creates a great marriage of flavors in your mouth.  Sweet peanut butter complements the sharp, salty taste of the shrimp paste with smooth as silk tender oxtail meat. 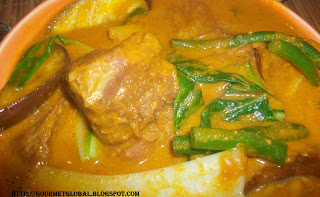 Tito’s Rad’s dessert sampler inlcudes ube cake, cassava cake and flan.  Ube is a purple yam, eaten in the Phillipines, India, Hawaii and other parts of Southeast Asia.  It is used in many filipino desserts, ensuring a brighly colored, moist cake.  Very sweet and moist, this flourless cake was delicious.  The cassava cake was another flourless cake.  Again, it was sweet and moist, although it had a little more body to it than the ube cake.  The flan was more dense than Spanish flan.  It is most likely made with more eggs than flans from other Spanish speaking countries.

There was also an additional special dessert of the nights. Stuffed banana rolls.  These were unexpectedly heavy, due to the addition of cassava in the rolls.  The flourless cakes were preferable. 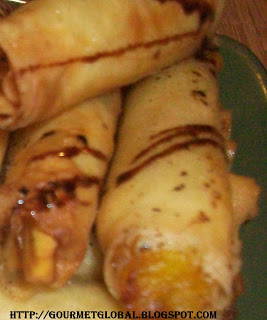 This is a family style restaurant.  All of the food is served in extremely large portions.  For this reason, it is best to go with a group of at least 4 people.  It also gives you the opportunity to sample many foods, giving you a comprehensive view of Filipino cuisine.  All of these foods seen here were sampled with a group of 8 people.

In conclusion, some things I enjoyed and a few not so much.  With an extremely friendly and accommodating staff, I would come again and now I know what NOT to order.  I hope this gives you some guidance on what to order when you try Tito Rad’s.

If anyone can suggest other Filipino restaurants for my to try as comparison, I would appreciate the feedback.