It’s time for another of our Cookbook Cooking Recipes.  This one was taken from the 1992 Best of the Best.  The Best of the Best is an annual cookbook that is published by Food & Wine Books.  They take the best recipes from the best cookbooks of the year and publish them in the Best of the Best.  This recipe is actually Sheila Lukin’s (of Silver Palate fame) USA cookbook.  She spent three years traveling the United States to discover the hidden gems of our county and one of these gems was Sour Cherry Lamb Shanks. 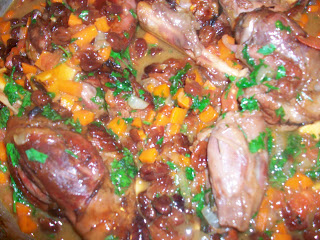 Preheat the oven to 350 F.
Sprinkle the lamb generously with the salt and pepper.
Heat 2 tablespoons of the olive oil in a oven proof pot over medium heat.  Add w of the shanks and brown them well on all sides, about 8 minutes per side.  Transfer to a plate and repeat with the remaining shanks. 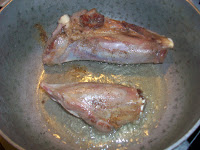 Pour off all the fat in the pot and add the remaining 1 tablespoon olive oil.  Add the carrots and onion and cook over medium-low heat, stirring occasionally until vegetables are cooked, 10-12 minutes.
Return lamb shanks to the port along with any accumulated juices.  Add the chicken broth, wine, honey, garlic, cinnamon sticks, sage and allspice. 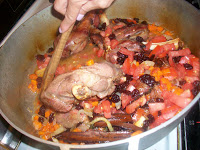 Bring to a boil, cover and transfer to the oven.  Roast until the meat is tender, about 1 hour.
Add the tomatoes and cherries and cook uncovered for another 45 minutes.
Remove the cinnamon stick, stir in the parsley and serve over couscous and rice.

This was a delicious recipe, with lamb very tender and both sweet and savory at the same time.  I also believe this would be a wonderful recipe to do in a slow cooker, after you have browned the shanks and cooked the vegetables.  This is one recipe where it only gets better the longer it is cooked.

Although it says to serve with rice or couscous, I think the flavors of vegetables cooked in the oven complemented in better like some  braised fennel or roasted potatoes. 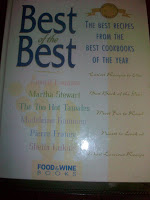 Hope you enjoy this one as much as  I did!