There are perks to being a blogger. Sometimes you get contacted to review products and sponsor giveaways. Sometimes you get invited to a new restaurant opening and then there is a VIP day trip to Saratoga Springs. Saratoga Springs is a racetrack located in upstate New York with a long racing history. It is one of the most reputable tracks in the country for horse racing enthusiasts.

I was invited by America’s Best Racing to an all expenses paid trip to Saratoga Springs including a brunch and chance to meet a jockey and learn about racing. We would also be spending the day in a private Luxury Suite with an up close view of the races of the day.

America’s Best Racing is a horse racing fan development initiative launched by The Jockey Club in 2013. In less than two years, ABR has been responsible for driving thousands of new fans to the races, including high-level influencers, celebrities, athletes, writers and bloggers. With an emphasis on the fun, fashion and food of a day at the races, combined with excitement and tradition of horse racing, ABR has emphatically demonstrated that the sport is back, and better than ever.

The day started with a 7am pick up in Brooklyn just 20 minutes from my apartment. That’s early on a Saturday morning and since everyone had woken up between 4-5am (with some traveling from Jersey) to get there on time, most of us slept at least half of the 3 1/2 hour bus ride upstate. The rest of the time was spent mingling and getting to know other bloggers and what they blog about. It was really interesting to find out people’s reasons for blogging and also learn lots of social media marketing tips.

The bus had been about 1/2 hour late and we arrived in Saratoga about 11am. Our VIP lunch included a variety of salads, sandwiches and desserts. While it was good, it was pretty standard fare. The hit of the lunch was the bar. 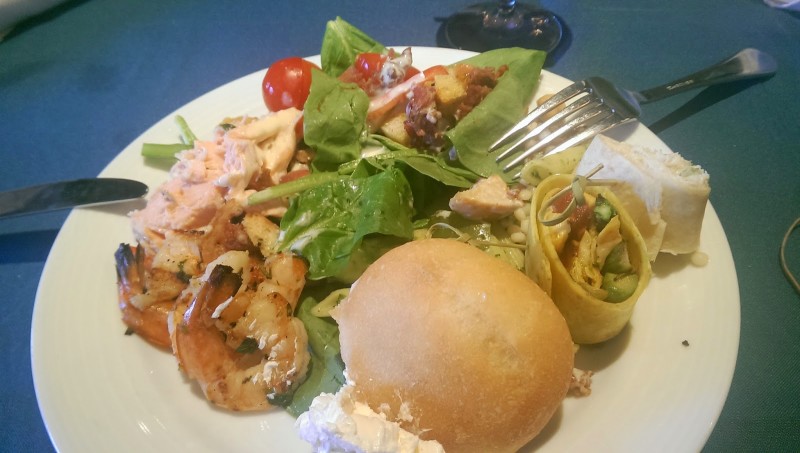 Whether you favor savory Bloody Mary’s or Sweet Mimosa’s, with a variety of garnishes and condiments, each drink was totally customizable for ever palate. Bloody Mary condiments included a variety of hot sauces, Worcester, olives, celery, hot peppers, capers which can be added to your base of vodka and tomato juice. The mimosa’s had a variety of fruit puree’s that could be added to the champagne base with fruit condiments of strawberries, mango, pineapple and more. It was a great opportunity to enjoy inspired cocktails, while mingling and networking with other bloggers.

Although we enjoyed our catered lunch, there are innumerable amount of dining options at the track for every palate.

However, the most interesting part of the day was learning about the sport of horse racing and what kind of training goes into being a jockey. We met one of the few female jockeys. While many of her male counterparts disparage her ability as a jockey claiming she is not strong enough, she does have an advantage. It is easier for her than it is for most men to keep their weight within the required range of 118 – 124 lbs. While they have to spend hours at the gym doing cardio exercises to burn calories and fat, the only training she does is on her horse. It is enough exercise for her to maintain her weight.

Also, did you know that horse racing is the only sport where an ambulance follows the participants. For every race, an ambulance drives alongside the horses so that if there are any collisions, the jockeys will get immediate attention.

Another interesting thing about the day were the hats. I was the only food blogger with a bunch of fashion and lifestyle bloggers – definitely out of my element with this fashion forward group. Not only our group, but I didn’t think a day at the races still meant the hats, but it does. I was sorry I did not get a hat beforehand because where else can you really wear a hat like this, although they did have stalls selling hats at Saratoga as well. 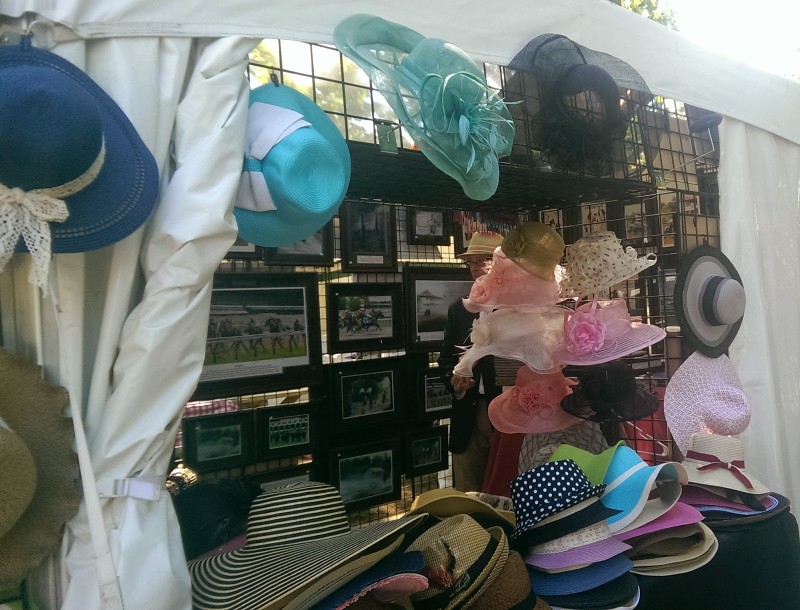 I felt like I had stepped onto the set of My Fair Lady – do you all remember that scene when Audrey Hepburn yells “Move your blooming arse!” 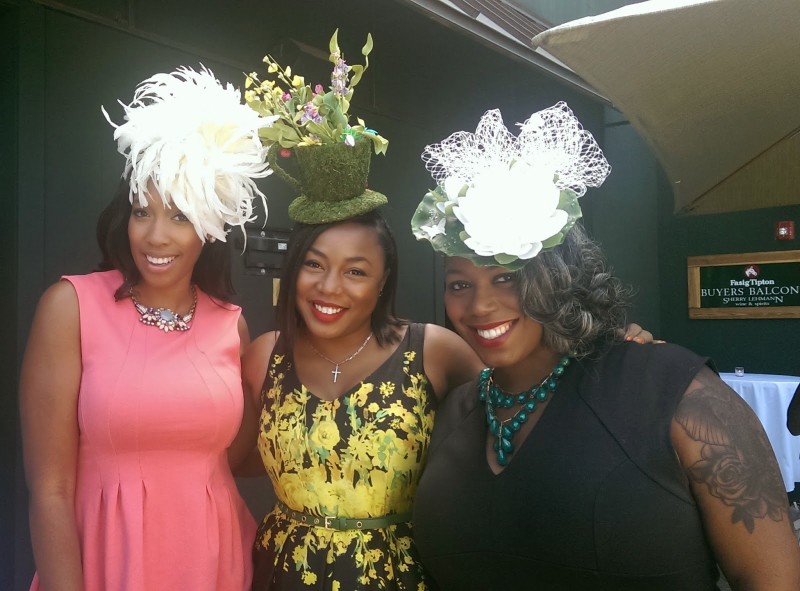 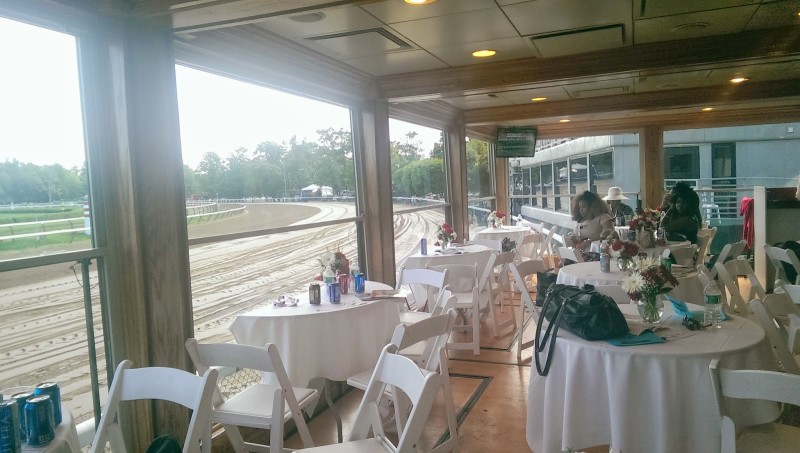 Whether you appreciate the sportsmanship of the jockey, or the spectacle of the hats or trying to win a little money on the races, Saratoga Springs makes a great day trip to get out of the city for a day. America’s Best Racing has turned me into a racing fan!

I really had fun for my day at the races! 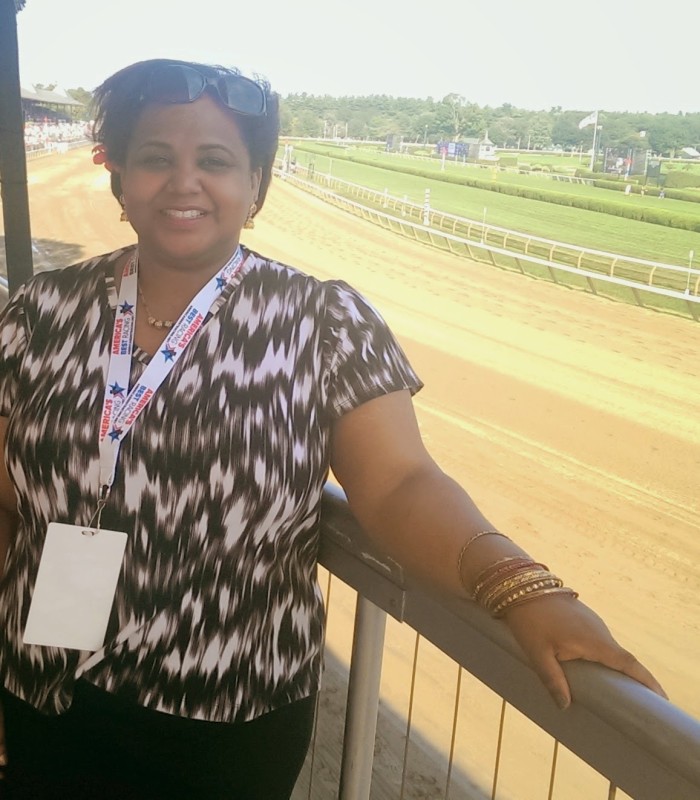