Queens Vlaai is a traditional Dutch Apricot Tart baked on a yeasted pie crust to celebrate the Dutch royal family – the House of Orange-Nassau.

My Mom is from the Dutch Caribbean and a lot of Dutch foods traveled from the Netherlands to the Nederland Antilles. This is why I have so many Dutch treats posted here like Oliebolen, Ontbijtkoek and Rijstevlaai. I have been eating Dutch food since I was a child and the cuisine is as familiar to me as Caribbean is.

The official royal name of the Dutch Royal Family is the House of Orange-Nassau. Many Dutch things have the word orange in it to symbolize the House of Orange. The capital of my mother’s birthplace of Aruba, a former Dutch colony, is Oranjestad, translated it means the state of orange. This royal dynasty was created by the marriage of Henry III of Nassau-Breda of Germany to Claudia of Chalon-Orange of French Burgundy in 1515. William I, a descendant of this union was the first king when the Kingdom of the Netherlands was established in 1815.

Now enough of history…back to this dessert. There are a number of foods colored orange to represent the House of Orange including Oranje Boven and this is one of them. The dried apricots represent the color of the House of Orange. Vlaai is basically the Dutch word for pie, but these pies are different than American pies, in that they are all made with a yeasted dough. So this is the Queen’s Tart, due to it’s orange color. There were three monarchs of queen rulers in the Netherlands dating back to 1890 until Queen Beatrix abdicated her throne in 2013 for her son to become king. I am not sure when this dessert was created. It could have been under any one of the previous queens’ reign. It is one of the foods made on Queen’s Day, which will be celebrated next week…except it’s now known as King’s Day, since there is no longer a queen in power.

But before I get to the recipe, you may notice that these photos have a different look to my usual photos. There’s a reason for that. They weren’t taken by me. One of the greatest gifts that blogging gives is friendships that form through blogging groups or mutual appreciation of each other’s blogs. What’s even better is when you live in proximity to each other and get to translate those online relationships to in person friendships.

The members of the Blogging Marathon group who live in the NY/NJ area all get together periodically to have lunch and learn from each other so that we can all improve each other’s blogs. Learning from Usha, Pavani and Rajani, my skills are getting better as a photographer. So I used our most recent meetup to take advantage of their superior skills. I definitely learned some skills in the process and have noticed my pics are a bit better since meeting them again. It was a fun day that included a delicious lunch, a photography lesson and a visit to Christmas Tree Shop, which is located just behind Rajani’s home to pick up some cheap props. The first year we met only once. It has been gradually increasing and now we have planned to meet again next month. I can’t wait!

HOW TO MAKE DUTCH APRICOT TART

Using dried apricots, you don’t have to wait until apricots are in season to enjoy this delicious treat!

This tart is as delicious as it looks.

The whole blogging team enjoyed it, as well a Rajani’s son, so I can vouch for it being a #kidfriendly treat.

I have often made this treat for Mother’s Day, so if like mine, your Mom prefers fruit desserts to chocolate ones, this one definitely fits the bill. 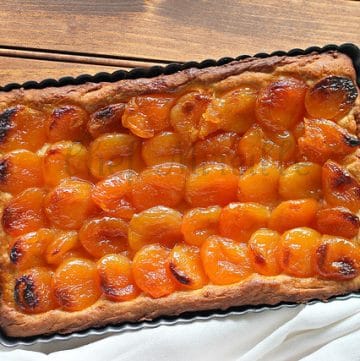