Known as an ouzi in many Middle Eastern countries, Parda Pulao is a delicious one pot rice & chicken pulao baked inside phyllo.

This is the second month I am participating in the Eat the World Cooking Challenge. The country the group chose this month is Iraq. I was so happy as this is a cuisine yet represented here on The Schizo Chef. One more country to check off!

After some research, I came across Parda Plau and realized it was a dish that has been on my to do list for a long time. There is a restaurant here in NYC, called the Moustache. It’s a Middle Eastern restaurant and ouzi is one of my go to dishes I order most of the time I visit the restaurant. I think the owners are Lebanese and I have discovered that ouzi, sometimes spelled oozi, is a popular dish throughout the Middle East.

Parda Pulao – Iraqi Parda Plau is basically the Iraqi version of ouzi. As I have eaten this dish dozens of times, I knew exactly what to put into it. This delicious recipe is doing double duty this month for Eat the World & Baking Bloggers.

The recipe below involves making your own chicken broth and using chicken on the bone to make Parda Pulao super flavorful. However, if you still want to make this dish but prefer a lazier method, you can also try this easier methodology.

The one part of Parda Pulao – Iraqi Parda Plau which is a little challenging is layering the phyllo, especially if you don’t have a large area of counter space to work with.

It will be easier if you make smaller individual ouzi, which is how it is done in the restaurants. Regardless, this version was just as delicious, if not as aesthetically appealing. 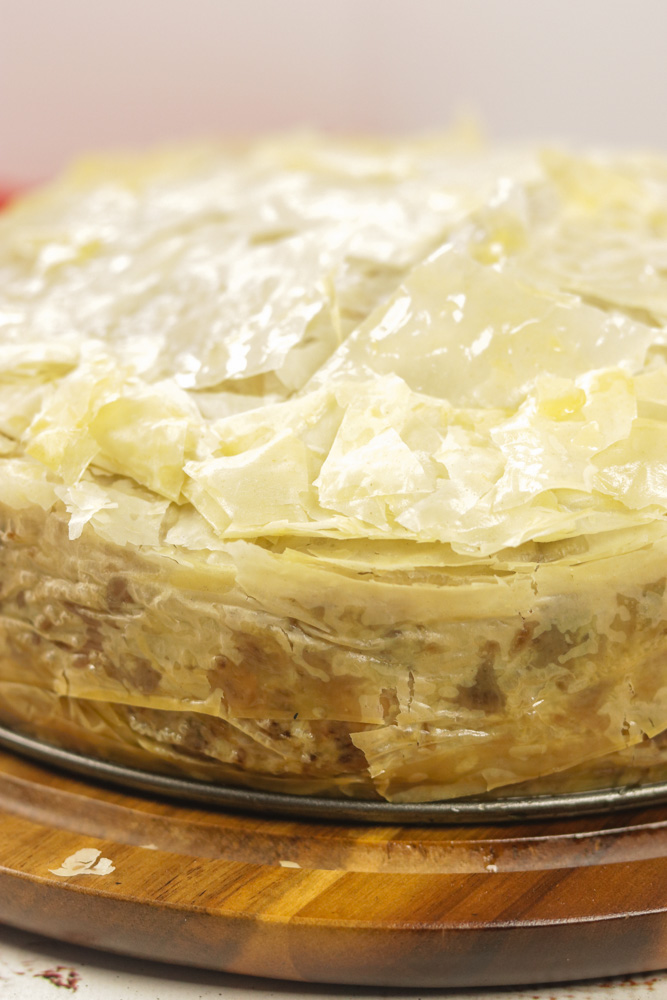 Since the dough dries out so quickly, you have to work very fast to keep the phyllo from breaking as you fill and layer. 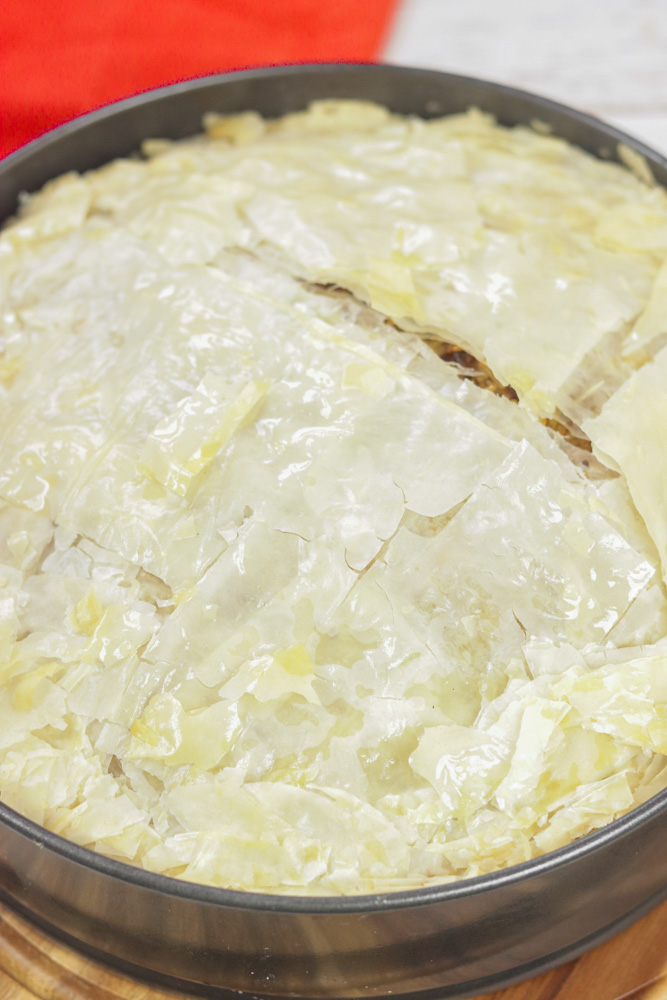 A super flavorful pelau baked inside crispy and flaky layers of phyllo seals in all of the flavors and makes it so delicious!

Parda Pulao – Iraqi Parda Plau makes a delicious dinner for any night of the week! 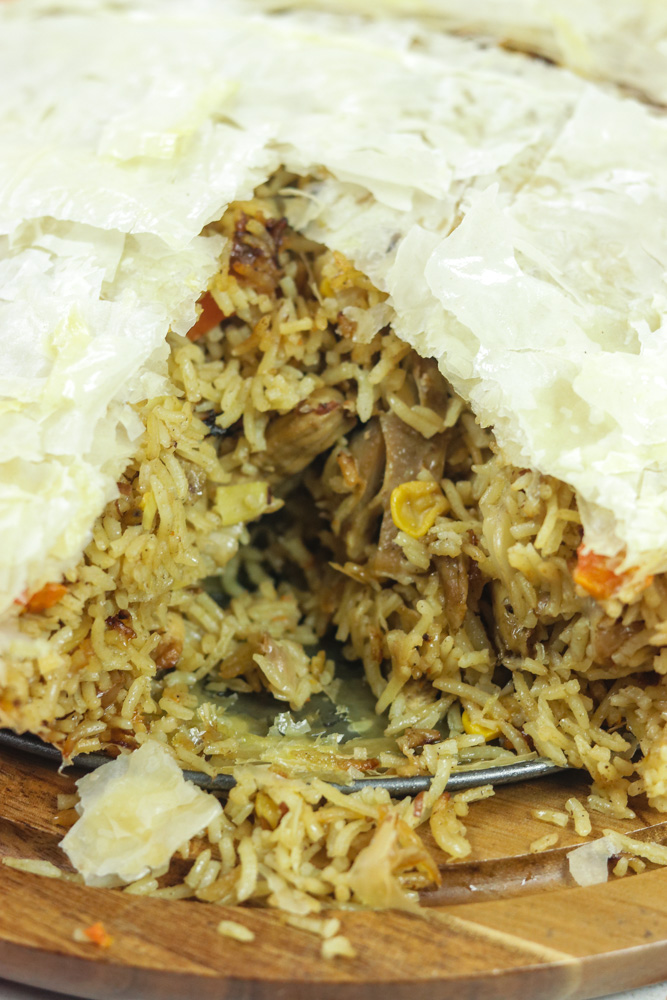 and hey if you want to skip the second step..I won’t tell…

This flavorful Chicken Pulao it makes a great weeknight dinner – an easy one pot meal – especially if you use the store bought chicken broth method! 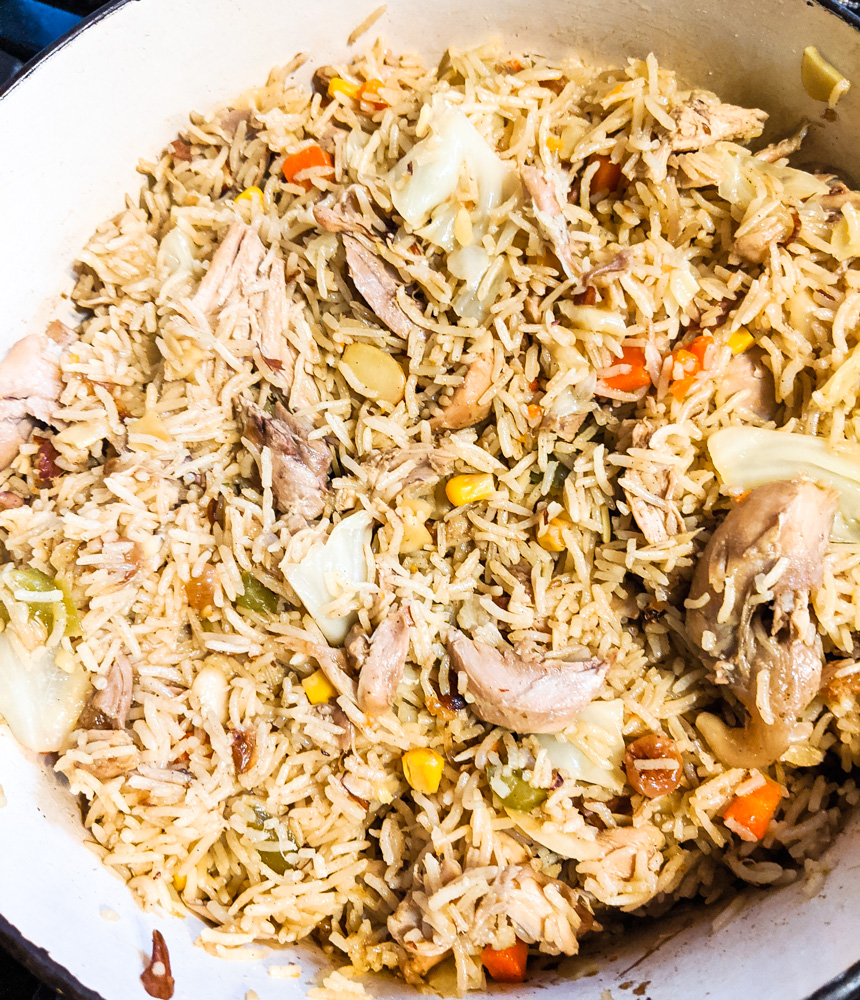 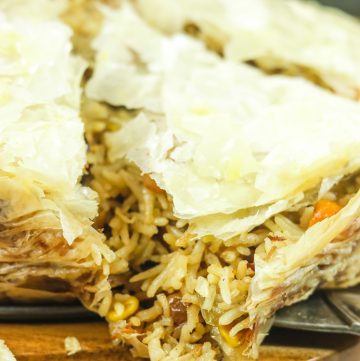 Any variety of vegetables can be used. I used cabbage, carrots, bell pepper and corn. Squash, pumpkin, cauliflower, green beans, green peas are other vegetables that can be used. Chicken broth can be made the day before and chilled. You can then remove additional fat from the top before utilizing.

Check out all the wonderful Iraqi dishes by fellow Eat the World members and share with #eattheworld. Click here to find out how to join and have fun exploring a country a month in the kitchen with us!