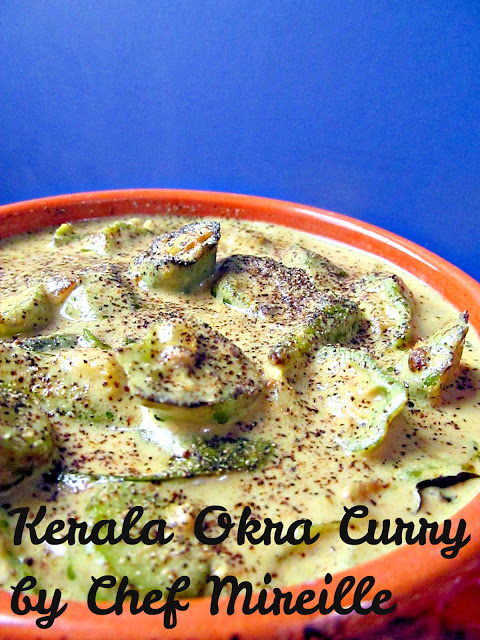 In the last week, I presented to you two recipes from Hyderabad cuisine, Daalcha Gosht & Khubani Ka Mitha. This week I am moving to the southwestern coast of India, with a few Kerala recipes.

Kerala is a very diverse Indian state. It was integral in the spice trade for many centuries, as clearly indicated by the number of spices in this recipe. Kochi, formerly known as Cochin is its most densely populated city and the commercial capital of Kerala. Although half the state is Hindu, it has the largest Christian population except for Goa. Additionally, one of India’s three Jewish populations is based in Kochi. The Cochin Jews had been in India for many centuries when most of them emigrated with the formation of Israel. However, a small community still exists.

Also known as “God’s Own Country” or “Land of Coconuts”, coconut milk, coconut water, coconut oil or coconuts itself are used in many of the religious ceremonies and foods of the different communities located in Kerala. With this religious diversity in Kerala, comes a diverse cuisine. I will be presenting three Kerala recipes this week from three different communities. This one is from Kerala’s Syrian Christian community.

Kerala is a contradiction in many ways. It’s got the highest literacy and the highest life expectancy rate in India, yet is also has the highest morbidity rate. This may be due to the lack of clean, unpolluted water. With its development, high economic growth and urbanization, Kochi especially has seen a great increase in crime and slums, however, violent crime is rare in Kerala and there is less incidence in crimes against women. This may be due to the fact that there is less difference in literacy and education between men and women, than in other parts of India.

While many people dislike okra, it is one of my favorite vegetables and I cook it many different ways. When looking for authentic Kerala recipes, the same recipes seem to be repeated everywhere – Plantain/Elephant Yam Kootu Curry, Pumpkin or Plantain/Elephant Yam Errisery and Beetroot or Cabbage Thoran. I didn’t want to see one more version of the same recipes again. The repetitiveness was not inspiring me to make yet another version of the same. Finally, I came across this Okra Curry which seemed to be one of the lesser known foods of Kerala, at least in the blogosphere.

By stir-frying the okra before simmering it in this curry, it maintains its form and there is no sliminess usually associated with okra.

Combine spices with 2 tablespoons water to form a paste.

Heat 2 tablespoons of the oil in a large pan. Add okra and saute for 3 minutes, stirring often. Remove to a plate.
Add the remaining oil. Add the onion, curry leaves and ginger and cook, until onions soften.
Add coconut milk and spice paste and bring to a boil.
Add okra and reduce to a simmer.  Cook for 15 minutes until okra is cooked, stirring occasionally.
Add lemon juice and stir to combine.

Remove from heat. To serve, garnish with a generous amount of freshly ground black pepper. 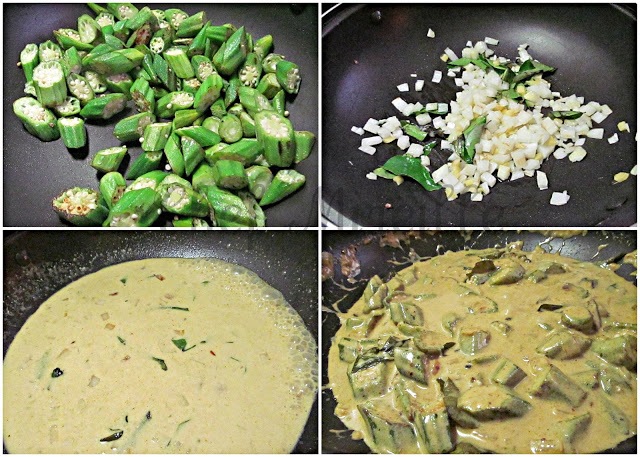 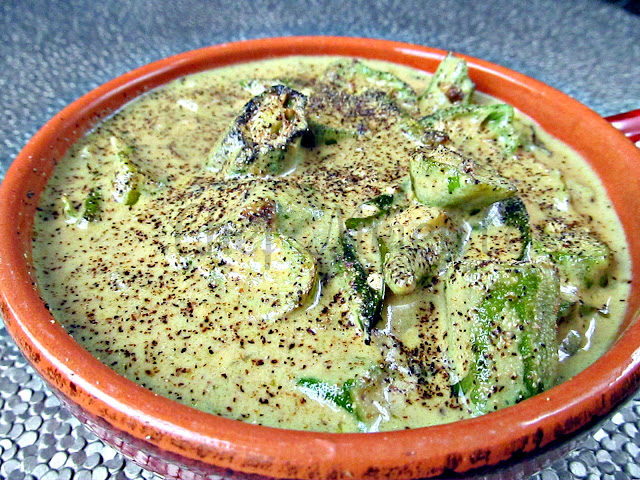 I’ve served it with Rosematta rice, a red grain rice with a nutty flavor and texture, which is popular in some parts of Kerala and Sri Lanka. 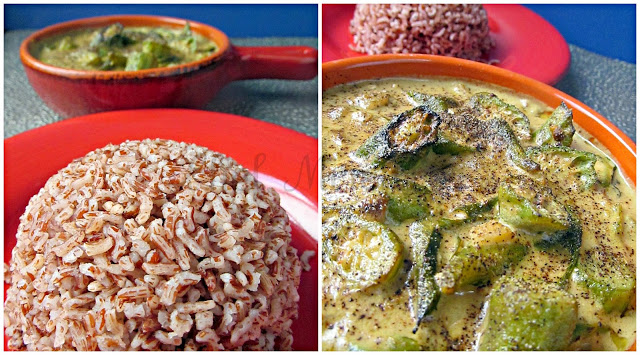 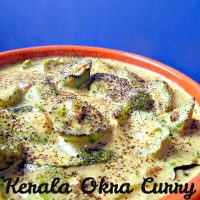