Pindakaas Soep or better known as Pinda Bravoe is the Surinamese interpretation of African Peanut Soup Recipe brought over by African slaves. This Suriname Style Peanut Butter Soup stands out from the rest with the inclusion of delicious Plantain Dumplings called tom tom.

Pindakaas Soep met Kip en Tom Tom (Peanut Butter Soup with Chicken & Plantain Dumplings) is a holiday classic in Suriname. Whether it is Christmas or Ramadan, no holiday is complete without Peanut Soup.

Peanut Soup, also known as Groundnut Soup in Africa is ubiquitous throughout West Africa, with each country having their own version. With slavery, African Peanut Soup became popular everywhere they went from Suriname to Virginia.

Due to local preferences and ingredient availability, the interpretations in different regions throughout South America and the southern United States are different from West African Peanut Soup, however, it is clear to see the root of all these Peanut Soup recipes lie in West Africa.

This soup, which really has the consistency like thick stews is perfect for cold days. This rich, thick and luxurious soup is perfect for those wet rainy days or snowy days, especially during the winter months.

Have you ever tried Peanut Soup before? There are many versions around the world.

Where does Peanut Soup come from?

African Peanut Soup or Groundnut Stew is ubiquitous throughout West Africa with many versions of peanut stew in the different countries like Ghana, Sierra Leone and Senegal. This is one recipe that travelled the world. Where slavery existed, you will find a version of Peanut Soup.

In Suriname, due to the Dutch colonization, allspice and celery are key ingredients in our cuisine. Therefore, our version of Peanut Soup includes these ingredients which are central to Suriname cuisine.

In Suriname, peanut soup is always eaten with tom tom (little green plantain balls). This special little twist makes this an excellent recipe for Peanut Soup you have to try! Your taste buds will be thanking you.

Although this recipe includes chicken, you can easily make a vegetarian version by using vegetable bouillon cubes and replacing the chicken with vegetables like carrots and potatoes. Actually, with no dairy, this would make it a vegan soup.

My grandfather and many of my aunts, uncles and cousins are from Suriname. In fact, my family has a mango plantation there that any descendant can live on, if desired. Who knows – maybe I’ll move there one day 😉

Suriname is the only Dutch speaking country in South America, located on the northeast coast. Originally it was one of the three Guyana’s.

There used to be three Guyanas – British, French & Dutch. However, in 1975 Dutch Guyana earned independence from the Netherlands and became the country of Suriname.

Similar to Guyana, although located in South America, Suriname is economically and culturally linked to the Caribbean.

Suriname is one of the most diverse countries in the world with large communities of Indian, Indonesian, Chinese, African and Dutch people. Now you know why my family is so diverse!

In fact, it was with the Indonesian Surinamese part of my family that I learned this recipe from my aunt. That section of my family is Muslim as many Indonesian are. I was visiting them one year in the Netherlands, where much of my family migrated after Independence, right when Ramadan was ending.

To celebrate, my aunt prepared a big feast including this Suriname Style Peanut Soup. In Suriname, this delicious Pindakaas Soep is one of the ways the end of the Ramadan is celebrated with.

The only change I made is that my aunt makes her own peanut butter. I just make sure to use all natural peanut butter, with no additional sugar added and achieve the same result with a lot less work.

There are a few unique qualities of the Suriname Style Peanut Soup that may be different to the African Peanut Soup’s you may have had before.

Due to the fact that Indonesia was also colonized by the Dutch, their colonial name of the Spice Islands is represented in Surinamese cuisine. Nutmeg, allspice, cinnamon and star anise permeate our cuisine in both sweet and savory recipes.

In this soup, it is seasoned with allspice as the only seasoning as allspice really does have a flavor that combines many smoky spices into one.

The other unique quality of Pindakaas Soep met Kip is the inclusion of Tom Tom. Tom Tom of small balls made of green plantain. If you try to process green plantain alone into a dough, it can be really challenging.

The trick my aunt taught me was to add a little bit of grated cassava. This makes all the difference. You will find it very difficult to assemble the tom tom without the cassava. My aunt also will use freshly grated or frozen coconut, if she does not have any cassava. You can use any combination of plantain, cassava/yuca and coconut.

You can use chicken thighs or drumsticks. I do not like to use chicken breast in soup because it dries out too quickly.

However, if you are cooking it for a dinner party and need more refinement in the end product or for small children, you can use boneless chicken thighs or drumsticks. If using boneless chicken, raise the chicken quantity to 2 lbs.

Now let’s check the pantry to make sure you have everything. This version has simple ingredients you probably already have in the house.

You can make it with boneless chicken or chicken on the bone!

Place a wooden spoon across the pot while the soup is simmering to prevent it from boiling over. This works when boiling any tupe of liquid from soup to milk.

This will become a family favorite and a great recipe to utilize versatile Peanut Butter.

I guarantee this is going to become one of your favorite soup recipes. In my family, there are fights for the last bowl!

Now for the best soup to make this winter season, you have to try this delicious soup – Suriname’s variation of West African Peanut Stew. 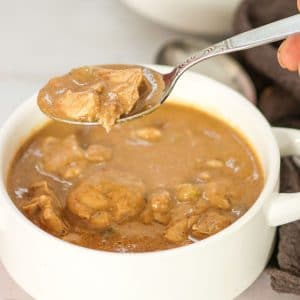 Print Recipe Pin it for later!
4.95 from 20 votes
SAVE THIS RECIPESaved!