Today’s post is kind of both a food and travel post. I have given you a little insight into my city. Almost everyone wants to come to NYC at least once in a while. This will give you a little idea about what it’s like.

I love living in New York City and I have always lived in the outer boroughs of Brooklyn and Queens. It’s the best of both worlds. Instead of feeling like a big city, the outer boroughs is more like a community of villages with each village having it’s own cultural identity. Staten Island the the Bronx are also the same. Manhattan is only a short train ride away, so you are not too far either.

We have a lot of villages representing the different cultures of NYC – there’s Caribbean, Greek, Latin, Asian, Indian, African, Middle Eastern, Polish, Italian, Jewish, Russian. This is where you will get the most traditional, authentic foods of these regions of the world.

If I want good traditional Russian food, I am going to go to Brighton Beach (see my post on Brighton Beach here) – not some fancy restaurant in Manhattan for double the price and half the flavor.

Tourists who only stay in Manhattan they just don’t know what they are missing by skipping out on visiting the diverse communities of the outer boroughs. Little Italy in Manhattan is a highly commercialized 2 block section where all the food tastes the same, however Little Italy in the Bronx is a thriving traditional community of mom and pop shops, where the owners are so friendly and will talk to you like you are their long lost cousin.

I will never forget once I was in Teitel Brothers just browsing and the owner calls me over and says “Hey, would you like to try a fresh ricotta salata I just got in from Sicily today. It’s stuffed with dried apricots and a special I only get once in a while.” Who would refuse that? Well he took out a piece and just started sharing with everyone in the store. Everybody was oohing and aahing over the amazing flavor and talking with each other about the cheese. It became like a family party with everyone fawning over the special dish. You will never have that experience in the faux Little Italy in lower Manhattan.

I grew up in Jackson Heights in Queens. Now Jackson Heights has two sections – an Indian section and a Latin section with people being mostly from South American countries like Peru, Ecuador and Colombia. In fact, one of my favorite restaurants Urubamba is here. Do check out the restaurant review I wrote here.

My mom still lives there so when I was on my way home after visiting her the last time, I decided to take a walk around instead of going straight to the train station to return home. I walked about a 20 block area from the Latin section to the Indian section and stopping at every supermarket on the way. Yes, I am a New Yorker and we are walkers!!!

Truth be told, I was on the lookout for Queso Paraguaya, a Paraguayan cheese to make Mbeju, a gluten free Paraguayan flatbread. I never found the cheese, but I refuse to give up. This is NYC. I know it is here somewhere, I just have to be patient and I will eventually find it. Of course, I could substitute another cheese – but where’s the fun in that?

Although Queso Paraguaya was no where to be found, there was such a huge variety of cheeses from Ecuador, Colombia, Peru and Honduras, I still picked up a few that I haven’t tried before just to sample.

After coming home with some Ecuadorian food products, I decided to settle on something from that country to the last of my three South American recipes this week. Ecuador sits right on the equator so the country is simultaneously in three hemispheres – southern, northern and western. With that , they have a diverse climate and a diverse cuisine.

HOW TO MAKE ECUADORIAN PASTA CHEESE SOUP WITH POTATOES

It’s kind of like Mac & Cheese in soup form. Definitely not low cal, but on cold winter nights when you want something thick and creamy, this soup just screams COMFORT FOOD. 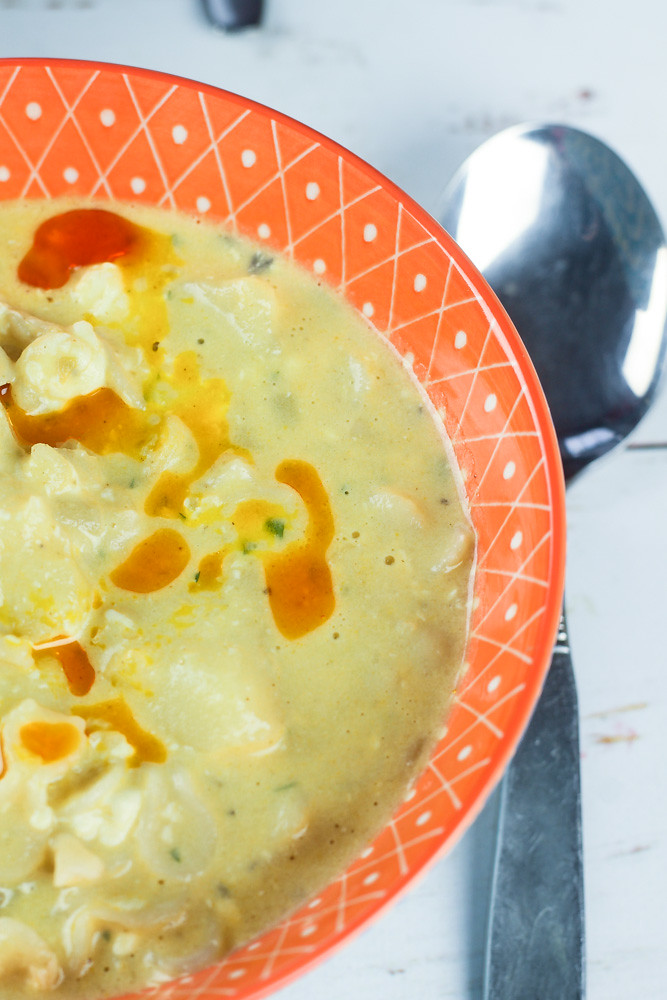 If you would like to add some spice to it, you can serve it with Aji Criolla.

Don't forget to tag me @chefmireille #chefmireille on Instagram so I can see your recreation of this delicious recipe!

NEED MORE INSPIRATION? CHECK OUT MY RECIPE INDEX WITH OVER 1000 INTERNATIONAL RECIPES FROM AROUND THE WORLD