Jump to Recipe Jump to Video

Features a freshly made spice blend – Bafat – that adds so much flavor to this dish from the Indian state of Karnataka.

As soon as Valli announced the BM themes for this month, I knew immediately I would choose Karnataka for the one state, three cuisines theme. Most states of India have a variety of cuisines, usually divided by religious or ethnic differences and sometimes by geography. Sometimes, the cuisines of the coastal locations will vary greatly from those cities located more inland. I remember when we did the Indian Food Odyssey Mega Marathon in April that Karnataka had several distinct cuisines.

The first Karnataka cuisine I will be exploring is Konkani. There are different sects of Konkani people along India’s western coast in the states of Goa, Karnataka, Maharashtra and Kerala, all speaking different dialects of the Konkani language. When the people of Goa were conquered by the Portuguese in 1510, many were forced to convert to Catholicism, although some fled to escape the conversion. There were also missionaries in Karnataka and the other states, which caused the Catholic conversion there. For this reason, many Konkani’s are Catholic. They eat meat regularly and are especially fond of pork and chicken.

What is a sukka?

A sukka is basically the term to identify a dry curry, that will not include gravy and copious amounts of coconut. However, this type of sukka is also referred to as a fugad, where the tempering of curry leaves and mustard occurs before the main ingredient is added. This is a departure from the more common Indian food preparation method where the tempering of these ingredients occurs after the main ingredient is cooked and is called the tadka.

This type of sukka preparation is very popular in Mangalore and there are many variations based on each family. This variation I developed after consulting several recipes. While doing research to develop this recipe, I wanted to give a special nod to two Mangalore blogs I found that are full of interesting information about Mangalore culture and lots of delicious recipes – Ruchik Randhap & The Tiffin Box.

If you try this recipe, you will start craving more Karnataka cuisine so check out my Karnataka Thali that features:

Now let’s get to today’s recipe.

Besides their heavy consumption of meat when compared to other South Indian cuisines, the other distinguishing part of their cuisine is the use of Bafat. Bafat is a Portuguese inspired spice blend that gives their foods its distinct flavor and aroma. Although more often used in meat preparations, it’s also used often with kala chana (black chickpeas) or other legumes sometimes in combination with vegetables.

First we have to make the Bafat Spice Mix. You will have leftover that you can start using to flavor any variety of foods. Sprinkle on some roast potatoes before you stick them in the oven or roast pork or grilled chicken. The possibilities are endless.

IN THE MAKING – HOW TO MAKE CHANA FUGAD 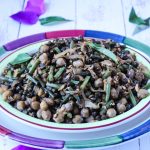 A very classic Mangalore dish using this preparation is kala chana (black chickpeas) and tindora (ivy gourd). You can adapt this recipe with those ingredients as well.

For a complete Karnataka meal, enjoy with Chicken Coorgi