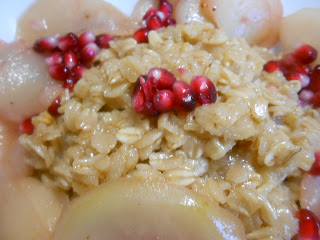 I love pomegranates and they have a short season and it’s now!  Pomegranates are in every supermarket and at reasonable prices.  Since they are in season, you can get really big pomegranates right now which are heavy and full of seeds.

If you have never had a pomegranate before, it is important to note that you do not eat the white pith that is inside.  You take out the seeds and the seeds are the only edible part of the pomegranate. 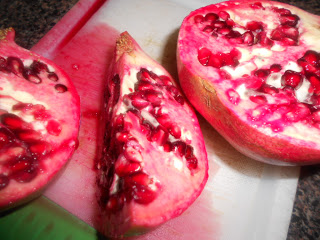 Now a little bit about oatmeal.  I grew up with Caribbean parents who make a rich oatmeal, made with evaporated milk.  Growing up with this delicious version spiced with cinnamon and star anise and sweetened with brown sugar, I have never been able to stand the bland oatmeal made with water that I have been subject to at American establishments.  However, evaporated milk is very rich and not kind to the waistline, so I wanted to come up with a version that was in between my version and the bland version.  I came up with this solution – the trick is to neither use water or milk, but apple juice instead!

In a medium saucepan, bring apple juice with spices to a boil.  Add oats and reduce to a simmer.  Cook until oats are cooked, about 10 minutes (it may be less time if you use quick cooking oats).
Stir in brown sugar and remove whole spices, to serve. 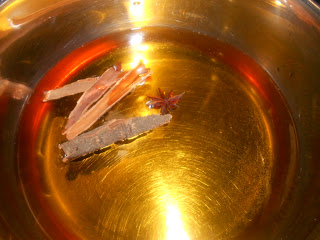 In a skillet, melt butter.  Add brown sugar.  When it starts to sizzle add water and pears.  Cook for about 5 minutes, until pears are cooked, but still have a bite to them.  Stir in nutmeg and pomegranate seeds.  Serve immediately with oatmeal.

Garnish with a few extra pomegranate seeds in the middle. 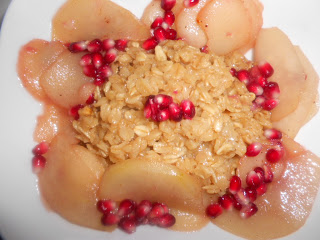