Sujeonggwa is a traditional Korean beverage made with cinnamon, ginger and dried persimmons. It’s great hot or cold and can be enjoyed any time of day! You might not have heard of it before but we think you’ll love it. We know that once you taste this delicious drink, you are going to love it.

In Korean cuisine, rather than cakes, cookies and pies, the most common desserts are dessert teas. Essentially they are herbal drinks infused with spices and usually include some kind of fruit.

This Korean Punch is very addictive – It is so delicious!

Don’t be alarmed by the amount of ginger in this recipe – It blends wonderful with the other ingredients and does not overpower the drink.

Although you might not have known its name, this Korean Cinnamon Tea is often served at Korean Barbecue Restaurants at the end of the meal because it includes healthy ingredients like the cinnamon and ginger, which aid in digestion.

Sujeonggwa is the best way to end the meal! 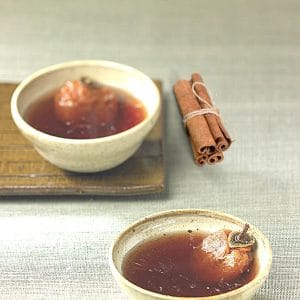 Korean Persimmon Punch is a dessert tea made with cinnamon, ginger and dried persimmons. A light dessert to end the meal with all of the health benefits of cinnamon and ginger.
Prep Time40 mins
Resting Time12 hrs
Course: Drinks
Cuisine: Korean
Servings: 6 people
Calories: 433kcal

Strain it and add some soju for a great cocktail.